The Legend of Saint Nicholas

The Legend of Saint Nicholas 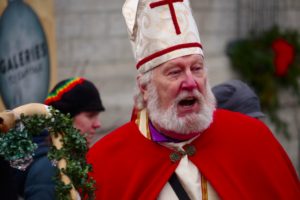 Long ago, in a far off land known today as Turkey, there was a boy named Nicholas. Nicholas was a person who created numerous miracles and accomplished many good deeds. As a teenager, Nicholas inherited a vast fortune, but he had no idea what to do with it. Wanting to help those less fortunate than himself, Nicholas set out to make the wishes of others come true. While Nicholas knew the townspeople needed his help, he was also aware that they were very proud people, so Nicholas decided to help his friends secretly.

Each night, Nicholas would disguise himself and deliver such items as food, clothing, and money to the people of his village. Of all the townspeople, Nicholas felt the closest bond with one specific family. In this family, there were three daughters. Sadly, the family was very poor and the father felt much pain over the fact that he could not afford the weddings of each daughter. In his desire to help the family, Nicholas left a bag of gold on the father’s doorstep as the wedding of the oldest daughter was near. Upon discovering the money the next morning, the family was very happy!

When it was time for the second daughter to get married, Nicholas again visited the family. He threw another bag of gold into the family’s chimney. The family greatly appreciated the individual who was providing them with such a great fortune, but they had no idea as to who this person could be. As the third daughter’s wedding neared, the father decided to stand guard so that he could identify the kind person who had created such happiness for his family. On this visit, Nicholas tossed the bag of gold through an open window. Upon hearing the bag of coins land on the floor, the father chased Nicholas until he caught up with him.

Nicholas was embarrassed and did not want the father to make his identity known to the townspeople. The father promised to keep the secret but was so grateful for the kindness of young Nicholas that he could not keep the secret no matter how hard he tried. Soon the entire town knew that Nicholas was the person responsible for the wonderful events that had occurred in their town.

Every December, Nicholas took it upon himself to reward all of the boys and girls who had been good throughout the year by secretly delivering presents to them. All these years later, Nicholas is still remembered for his kindness, generosity, and undying love for children. In honor of Nicholas, many countries throughout the world provide children with gift bags in December on Saint Nicholas’ Day.